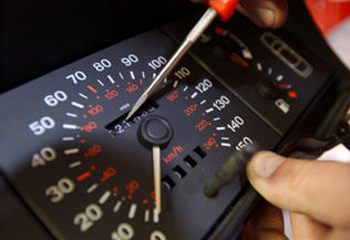 HPI and CAP Automotive have released a report on clocking cars and what the real cost is to those who end up buying them under false pretenses.

If you aren’t in the industry, clocking cars is the term used for when a car seller fiddles with the odometer which is the  instrument , sometimes electronic, sometimes mechanical, which displays how many miles the car has done. The reason someone selling a car might fiddle with this is to make it appear as though it has done fewer miles than it actually has which in turn makes the car appear more desirable and in turn, of course, worth more money.

I used to work in a garage and I saw it a fair bit, I even had one private seller approach me asking me to have a go at doing it for him so he could sell his second hand Honda Accord for a dishonest price, he seemed to think it was the done thing and that there was nothing wrong with the practice. Obviously I told him where to go. We also had someone try and sell us a second hand Suzuki SX4 which looked like it had lived through both the world wars, yet miraculously had only done 10,000 miles.

A way of making sure you don’t become a victim to this con is by making sure you see all the cars service history before you buy it which should show you how the mileage has gone up throughout it’s life, if it consistently goes up then you shouldn’t have much to worry about, if it suddenly plateaus then you might want to ask a few questions and if the mileage has gone down, obviously there has been something dodgy gone on. HPI and CAP have also published a chart of how reducing mileage impacts the price of the car: