You may or may not have been following this years Dakar Rally. You may not even know what it is… Basically it is the most extreme and toughest endurance race there is, where modded cars furiously tackle baron and untouched desert land in what is an often dangerous race. 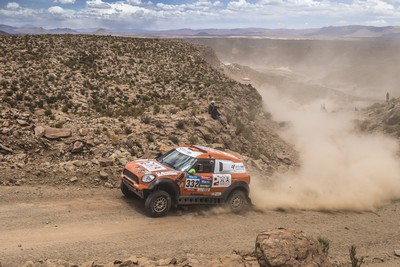 After two weeks the race has finally come to an end and the winner is… Mini! Now this may come as quite a shock as you probably don’t equate Mini with overland, of road endurance races which is understandable when your only experience of Mini is the Mini Hatch. However, Mini is actually quite formidable when it comes Dakar and has been victorious four years on the trot!  This years rally was held in South America, covering 9,000 kilometres across Argentina Chile and Bolivia with the race coming to an end today in Buenos Aires. The driver, Nasser Al-Attiyah had this to say:

“I promised last year when I was on the podium that I’d be back to win, and now I’m here. It was very hard to lead the race from the very beginning and to continue keeping this position on the long distance. Also because the race was really hard. I’m very happy about this great result and I want to thank and congratulate all mechanics and the team for the great job they have done during the two weeks. The MINI ALL4 Racing is an incredible car and it was again very nice to drive.”

Not only did Mini take the crown but they also took 3rd, 4th and 5th positions.Be warned this doesn’t mean you can take your second hand Mini Countryman for a trip to the Sahara, for the Mini used in the Dakar Rally is an extremely heavily modded vehicle that is more Monster Truck than it is a car.